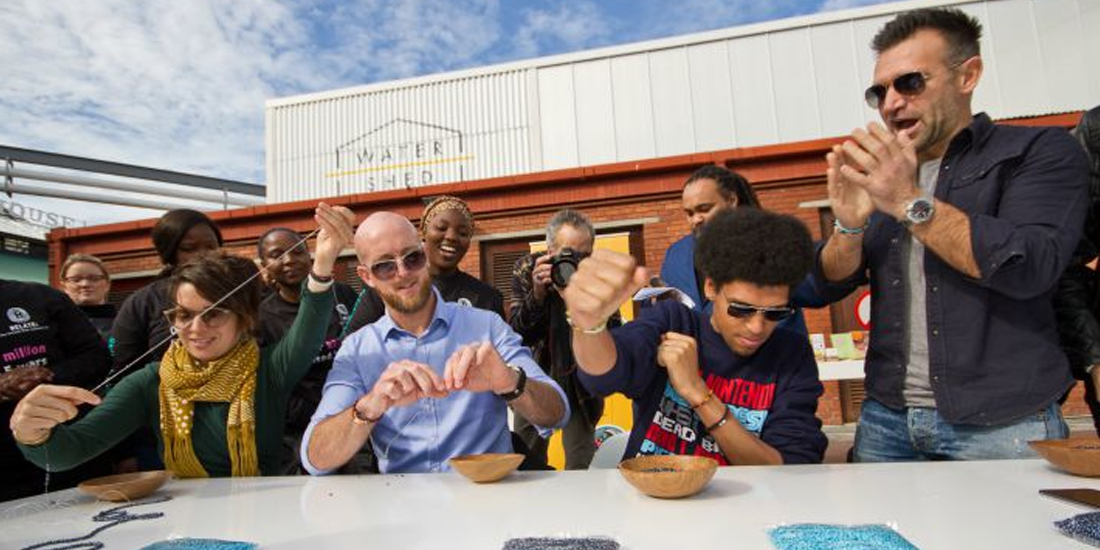 On Tuesday 14 July, a group of South African celebrities took on the Gogos from Relate bracelets in a beading challenge to raise awareness of South Africa’s senior citizens ahead of Mandela Day.

A team of eight Relate Bracelets Gogos took on eight celebrities, and Relate ambassadors, in a bid to see who could bead the fastest – all in the name of Mandela Day, and in support of Relate’s causes.

And while the celebrities gave it their best shot threading 6.17m of beading, the speed-beating Gogos thrashed them with their 7.40m thread.

Soccer star Matthew Booth may be quick on the pitch, but could he bead a bracelet in under a minute? He may have nimble legs, but his fingers are less nimble.

Former Miss South Africa Nicole Flint has been dressed by SA’s top designers, but how quickly can she thread accessories for change? Not fast enough, it seems.

Extreme conservationist and adventurer Braam Malherbe is saving the planet one day at a time, but how many bracelets could he bead for Relate’s wildlife and conservation beneficiaries? It was a valiant effort, but good thing the Gogos supplemented the balance.

These Relate ambassadors, as well as Bailey Schneider, DJ Sox, Jitsvinger, Mpumi Nobiva, and Kyla-Rose Smith of Freshlyground, battled the Relate Bracelets senior beaders in a relay for 67 minutes.

The event was held in support of all of Relate’s causes, including Ikamva Labantu, Reach for a Dream, Grassroots Soccer, The Amy Biehl Foundation, Operation Smile, the Endangered Wildlife Trust and Goodbye Malaria. But its focus was also to highlight the important role seniors play in our society.

As a gift for their participation in the event, Relate Bracelets announced that they are donating heaters to all 17 of the Ikamva Labantu seniors clubs where the Gogos, and some Tatas, spend their days threading.

“We will ensure that you are kept warm this year, and forever,” said Relate Bracelets founder Lauren Gillis.

Relate Bracelets Chief Executive Officer Neil Robinson said: “We want to bring awareness to the elder citizens of South Africa for Mandela Day, and draw attention to the fact that they are still very much a productive part of society. We have 300 seniors beading for Relate Bracelets. Many of them look after orphans – their own grandchildren or foster children.”

The senior beaders from Relate Bracelets earn an income from the beading work they do, which assists them to look after their grandchildren and foster children.

In five years of existence, Relate Bracelets has raised around R28million for a variety of causes. Over 60 in fact: from wildlife conservation and health programmes through to early childhood development and women’s empowerment – and many others.

The first Relate Bracelets Bead Off for Mandela Day saw a group of beaders, The Gugulethu Gogos, take down Western Cape Rugby players Cheslin Kolbe, Juan de Jongh and Nic Groom in a speedy beading challenge – an act which brought the proud elderly bracelet makers fame via print, online and social media, and bragging rights for a year.

Relate Bracelets raises money by selling beaded bracelets which are handmade in the townships in the Western Cape.  A portion of the money goes towards Relate’s own social upliftment, another portion to the materials and another portion to the charities that use the bracelets to raise funds for their work.  Part of Relate’s own social upliftment includes skills development training for their young adult staff as well as investing in enterprise development projects with fledgling black businesses.

In the past financial year, Relate Bracelets sold 500 600 bracelets, more than double the number sold in their first year of operation, and in the process raised R8,276 million for great causes – growing their business by 70 percent in just one year.

“I think the growth shows that there is an enormous consumer appetite for things with purpose and meaning and also a growing consciousness of social responsibility,” says Robinson.

Robinson asks: “What if every employed South African spent just R35 on one Relate Bracelet each year?”

“That would mean close to a quarter of a billion Rand towards these causes annually, with this easy to do, small spend impacting on our country in a big way. It could result in a big dent in our country’s problems.”