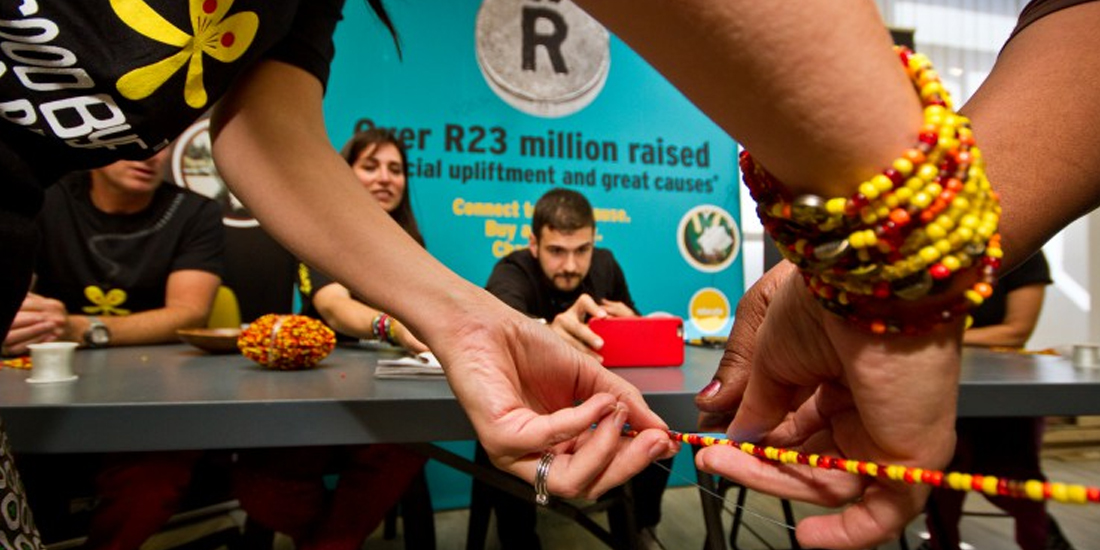 With every minute that passes – every single 60 seconds – a child dies from malaria.

Smooth and suave J’Something, front-man of the chart-topping South African band MiCasa yesterday (Tuesday 21 April) joined beaders from Relate Bracelets and Goodbye Malaria in a challenge to see how many bracelets they could make, and therefore lives they could protect, in just 24 minutes.

J’Something, in the spirit of ubuntu, led the community effort with the beaders, gogos and tatas of the Noluthando 1 Senior Citizens Club in Crossroads, at the Relate Bracelets offices in Cape Town’s CBD to make bracelets in aid of Goodbye Malaria ahead of World Malaria Day this Saturday 25 April.

The challenge was for the beading team to make as many bracelets as they could in 24 minutes, representing 24 hours in the fight against malaria.

Collectively the team beaded a phenomenal 16, 173cm of threading, a total of 8, 985 Relate Goodbye Malaria Bracelets. These bracelets each make a significant and tangible impact, with the sale of just one bracelet covering the cost of a sachet of insecticide from which two homes can be sprayed, and therefore protected from malaria, for six months. This is an important part of the overall programme.

From the sale of the bracelets made in 24 minutes, that means Goodbye Malaria can acquire enough insecticide to potentially spray 17, 970 homes and, with an average of three people per household, a potential  53, 910 lives could be protected as a result of the Beading for Malaria activation.

J’Something said that while it’s one thing to be an ambassador for Goodbye Malaria, it’s an entirely different thing to go to Mozambique to see the work being done on the ground.

“It’s incredible to be part of an initiative like this, to see the Relate Bracelets being made by these astounding men and women. I encourage everyone who is able to go out and buy a Relate Bracelet in aid of Goodbye Malaria. You will literally be saving lives,” he said.

“Relate is about connecting and those connection points mean we’re able to do what we do,” he said of the team effort between the beaders, the ambassadors, the causes they support and the media.

“Our goal this year is to sell 60, 000 bracelets each month and therefore raise and give away R1million each month. It’s such a small thing for each South African just to purchase one bracelet a year that would add up to the huge impact of a quarter of a billion rand a year for incredibly worthwhile causes. It means we would be able to employ another 1000 beaders on a daily basis, and franchise to create further employment opportunities in KwaZulu-Natal and Gauteng.”

To date, Goodbye Malaria has protected more than 120 000 people and sprayed more than 30,000 homes in the Boane district of Mozambique, resulting in a significant reduction in the prevalence of malaria.

Said chief executive officer of Goodbye Malaria Sherwin Charles of the event: “It’s absolutely amazing to see how well our ambassadors work and how they are prepared to give of their time. This event was about highlighting our success to date, but we can’t stop now. We’ve got to keep our foot on the accelerator.”

The colourful beaded bracelets are currently sold in Due South stores around South Africa. While Due South are the key partner for World Malaria Day and have made the bracelets widely available for the day, the bracelets are also available from the Relate Bracelets and Goodbye Malaria websites with select availability in other retailers including Tiger’s Eye curios stores.

“We chose to sell the Relate Goodbye Malaria Bracelets through our stores so that everyone can have the opportunity to get involved in being a part of the important impact they’re making in eliminating malaria,” says John Sieberhagen of Due South.

Established by a group of entrepreneurs committed to creating African solutions to solve African problems, Goodbye Malaria has been operating in partnership with the Ministry of Health in Mozambique since late 2013 when it began an indoor residual spray program in the Boane district in Maputo province.

“A percentage from the sale of every Goodbye Malaria product goes to our efforts on the ground – to the sprayers who walk from village to village providing information on malaria prevention and spraying homes, to the gear that protects them,” says Robert Brozin, founder of Goodbye Malaria and Nando’s.

“We have always wanted to create a brand that becomes so huge and popular that in turn we are able to make a difference – to make a change! And one more specific goal for us was and IS to influence the youth. With Goodbye Malaria we are able to do both. It’s a great initiative. And you know what? It saves lives. It saves a LOT of lives from the biggest killer in Africa – malaria,” says J’Something.

While Yvonne Chaka Chaka adds: “We have made huge progress over the last 10 years because of The Global Fund and Roll Back Malaria. Now it’s time to do if for ourselves to sustain these gains,” says Yvonne Chaka Chaka, Rollback Malaria Partnership, UNICEF Goodwill Ambassador and UN Envoy for Africa.

This article was first published by Spice 4 Life on 28 April 2015, click here for their original article.