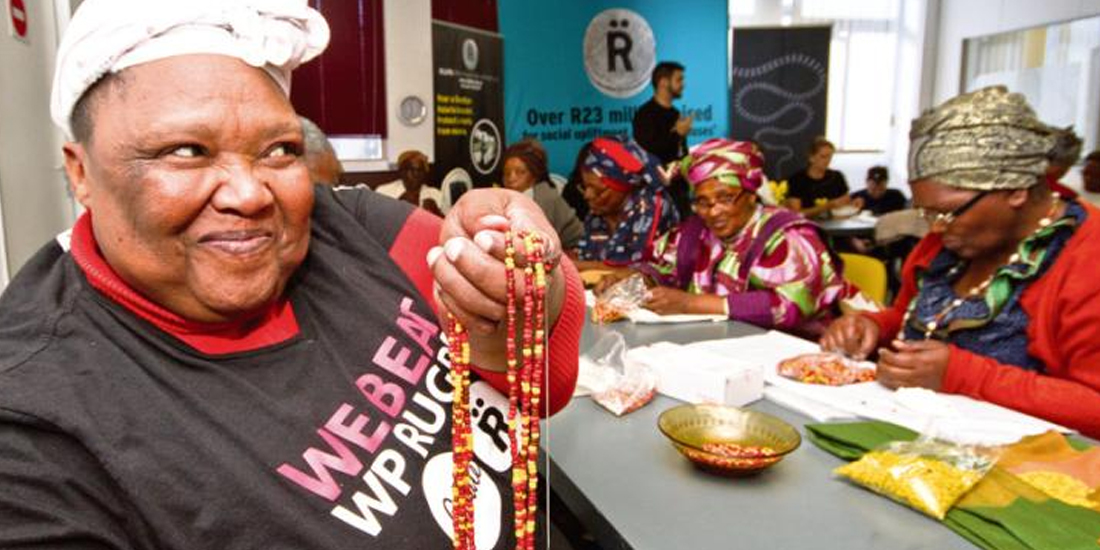 Cape Town - Just like the “Goodbye Malaria” bracelets he beads furiously from strings attached to his only arm, the Crossroads grandfather believes that locals and foreign nationals are bound together.

And they’re as deserving of protection from xenophobia, he says, as those threatened by the killer disease.

Saturday marked World Malaria Day, accompanied by a resounding call for the spirit of ubuntu to be upheld in the fight against the disease, which kills more than 600 000 people globally each year.

Despite being left-handed, then having that arm amputated after an accident while operating machinery at the factory where he used to work, William Zweni, 76, is doing his part, rapidly beading Relate bracelets.

The non-profit organisation held a special challenge this week, urging people to see how many bracelets they could make in 24 minutes. Zweni and the other grandmothers and grandfathers from the Noluthando 1 Senior Citizen’s club in Crossroads produced more than 800 bracelets.

The colourful red, yellow, amber and orange armbands are integral to the charity’s “Goodbye Malaria” campaign which, to date, has seen more than 30 000 homes sprayed in Boane in Mozambique, helping safeguard the lives of more than 120 000 people.

The bracelets threaded during this week’s event will go on sale at Due South stores, raising a projected R30 000, which will translate to 1 800 homes being sprayed.

The funds pay for insecticide sachets as well as protective gear for sprayers employed to travel from village to village.

Zweni believes that, like xenophobia, malaria transcends borders, and that everyone needs to do their bit to help protect the lives of those at risk.

“Our kids and people are also living in other African countries, and we need to treat each other with dignity and respect as we are one, all of the same blood, all Africans,” he said.

The sentiment was echoed by frontman for the band Mi Casa, Joao da Fonsca, who joined the elderly men and women making bracelets earlier this week.

“What’s going on is barbaric. These xenophobic attacks are ridiculous and those people responsible need to be isolated and dealt with,” he said.

“We as human beings need to pull together and ubuntu is so important right now. People need to look around and see what they can do to bring about positive change.”

Along with his bandmates, he said they had been inspired to become musicians and attain fame in order to make a “change”. Promoting the fight against malaria was one of the ways in which they could use their music for a good purpose.

Da Fonsca, who got some first-hand experience of the negative impact of the disease when he travelled to Mozambique with Goodbye Malaria, said it was “horrific to think generations are being lost due to mosquito bites”.

Admitting they “still have a way to go”, he said the initiative had managed to help reduce the prevalence of malaria by more than 60 percent during the last spray season between 2013 and 2014.

“This means a significant decrease of the parasite in the blood of that population, which takes a lot of implementation, especially in war-torn countries like Nigeria and the DRC,” said Charles.

The campaign also aided the Roll Back Malaria Partnership (RBM) and The Global Fund which helps fight Aids and TB.

“It’s really about getting the message out that you don’t have to live with it (malaria). It’s sad that in some countries people there consider it a norm, but it can be treated and prevented.

“Given what’s been happening in our country, it’s really a great initiative for everybody to contribute to,” Charles said.

* A child under five dies from malaria every 60 seconds.

* Malaria affects more than 200 million people, and kills an estimated 655 000 people across the world each year.

* About 90 percent of malaria deaths occur in Africa, with six countries on the continent accounting for 47 percent of all cases globally.

* The Goodbye Malaria campaign initiated the indoor residual spray programme when it partnered with the Mozambique health ministry in 2013.

* The sale of every Relate Bracelet ensures two homes are sprayed, which offers protection from malaria for six months.

This article was first published by Iol Online on 26 April 2015, view online here.