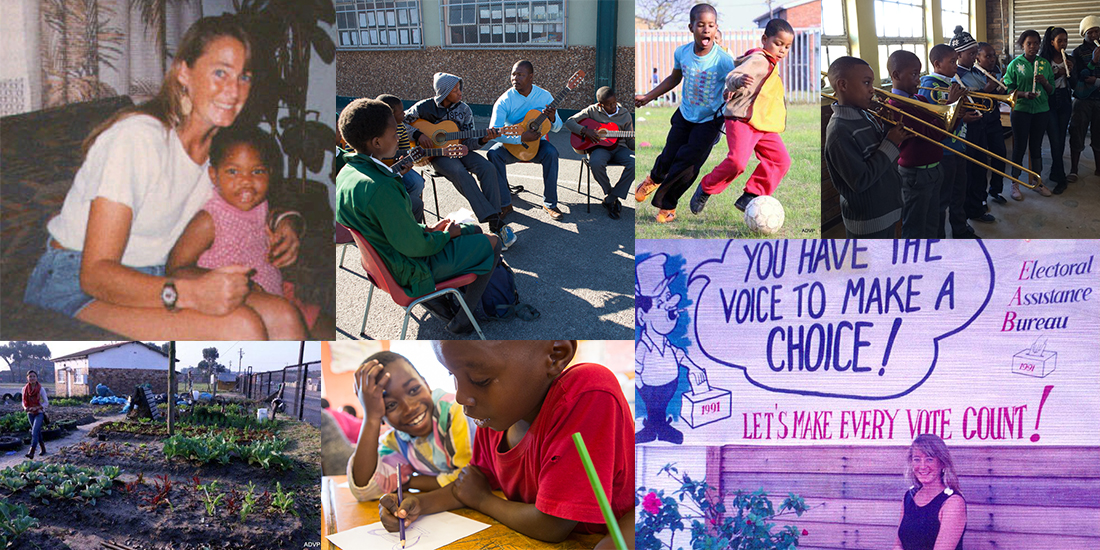 This August marks the twentieth anniversary of Amy Biehl’s untimely death.  This gives us a perfect opportunity to reflect on the past twenty years in South Africa, whilst looking towards the next twenty.

Amy was an American Fulbright studying at the University of the Western Cape, whose love for South Africa and its people was unequivocal.  She tirelessly worked with influential political figures, including the African National Congress, to improve women’s rights and work towards a common goal of a free and democratic South Africa.  She truly was an inspirational young woman, who saw an injustice in the world and took action to try and make a difference.  At the age of 26, Amy’s life was tragically cut short as an act of political mob violence in the Gugulethu Township.

Rather than place blame for their daughter’s death, Linda and Peter Biehl wanted to understand why such things were happening in our country, and seek to prevent them from happening in the future. Determined to honour Amy’s love of South Africa and her belief in the truth and reconciliation process, Amy’s parents supported amnesty for the men at the Truth and Reconciliation Commission. They chose to forgive in order to bring about positive change.  In 1997 they established the Amy Biehl Foundation.  Today, over 2000 youngsters attend their programmes, which are designed to give them an alternative to all of the negative influences within their communities, as well as supplement the shortcomings of the educational system here.

Amy’s story is one which helps us to consider how far our country has come, but that we still have much more to accomplish. Let’s work together to ensure equality, better education, less crime and reduced poverty in the future.  Stand with us in honour of Amy’s legacy; wear the change that you want to see by purchasing a Relate bracelet in support of The Amy Biehl Foundation.  Whether it’s wearing your bracelets as a stack to make a statement of your support, or sharing them to inspire friends to do the same, Relate bracelets enable ordinary people to become extraordinary change-makers.

Relate bracelets supporting the Amy Biehl Foundation are available in metallic grey or a colourful pattern.

Relate bracelets have partnered for several years with the Amy Biehl foundation to bring about positive change: “Thanks to people like you who have stood together to support this incredible cause, in the past three years, R733 916 has been donated by Relate to the Amy Biehl Foundation, which has enabled 266 children living in poverty to attend our after school programmes, giving them the opportunity to develop into well-rounded young people who make positive life choices. Not only are they empowered to become contributing members of society, with hope and a brighter future, the programmes also help alleviate the incidence of HIV/AIDS, poverty, substance abuse, gangsterism, violence and crime,” says Michelle Bagley, PR and Fundraising Manager at The Amy Biehl Foundation.

Relate was founded with a vision to help people in need of an opportunity to better their circumstances. So by purchasing a Relate bracelet in support of the Amy Biehl Foundation, not only are you donating funds to the Amy Biehl Foundation, but you are also investing in our bracelet makers, providing them with earnings and upskilling opportunities.