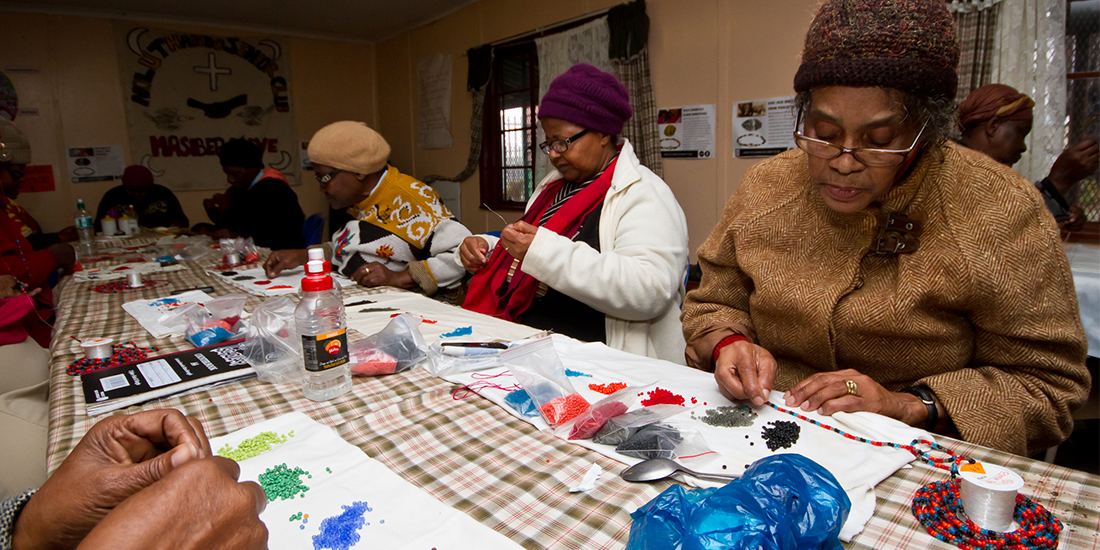 It is a reality that not many of our grandfathers and grandmothers can survive on the pension grant the State provides. They receive R1 260 each month, which is especially hard to make ends meet with if you are supporting your unemployed children and young grandchildren.

While many have forgotten the oldies that have played such an important role in their lives as well as the cultural and historic role they played in South Africa, our grandmothers and grandfathers still play an important role today. They have once again taken on the responsibility of parenting but they cannot do so on such a small amount of money and finding extra income is difficult for seniors.

The Relate Trust bracelet making process has made a significant impact on many areas of seniors’ lives. As they age, their meaning in the family unit changes. Older persons in vulnerable communities have the responsibility of being the backbone, yet their presence is not always seen as empowering or dignified but rather one of survival. An older persons’ pension grant is often their main source of income. Parental care and supervision of the home and grandchildren more often than none becomes their core focus – this due to the absent of biological parents because of death, migration, illness or social problems including trauma or substance abuse.

The partnership Ikamva Labantu has with Relate Trust has created opportunities for seniors to restore their dignity and hope. The opportunity affords older persons additional income of between R200 and R1 000 each month. This helps them to improve their livelihoods. One of example of this is Cleopatra Ququla.  Mama Ququla, has used the income she received from threading Relate Trust bracelets to renovate her home. She invested the money she earned in a local stokvel and was able to build a flush toilet inside her home. Ma Ququla had an outside toilet which had caused great anxiety because she cares for a disabled family member. This has improved their quality of life and restored dignity to her family.

Older persons have become the forgotten generation even though they are the ones who fought for the freedom of South Africa. Today they are still marginalised and live in compromised environments. With age comes illness and the reduced ability to be as participatory as we always were. This disengagement in activities that gave purpose and meaning to life may lead to a poorer state of being.

The Relate Trust bracelet making process creates an environment for active aging and active participation. Seniors gain from being involved in the programme cognitively, physically and socially.  An older person is impacted by their abilities, their environment and their ability to contribute actively. The Relate Trust programme creates this – not only by giving older person an opportunity to participate but also by being part of a “cause”.

“The fact that I am helping someone else has been wonderful and it has given me a good feeling about helping. As African women, we are not involved with animals but now that we are threading for organisations that save the rhino and other animals it tells me that we don’t live alone in the world and there’s a connection with all creatures.” Nomvuyo Mashalaba, 78.

Each Relate bracelet is threaded by seniors like Ma Mashalaba and Ma Ququla, so by purchasing a Relate bracelet you are not only positively contributing to the causes that we support, but also to the lives of our senior citizens.