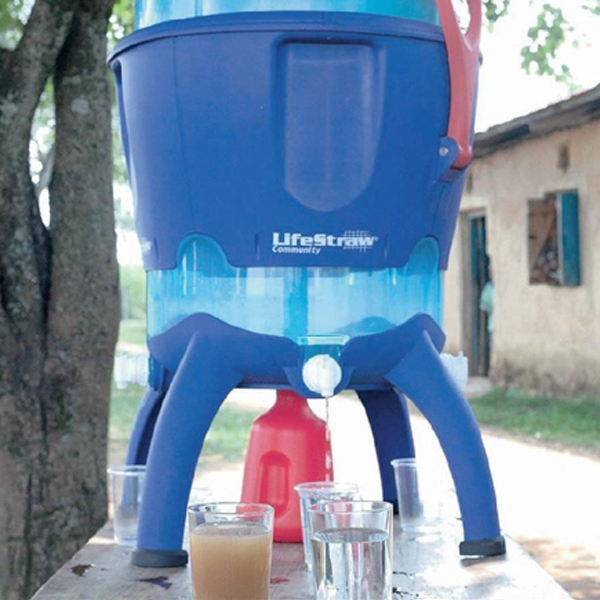 Seapoint Rotary Club has helped make it possible for a farm school outside of Wellington to receive a Community LifeStraw unit which will ensure its pupils, for the first time, have access to safe drinking water. The installation took place ahead of International World Water Day, marked yesterday, Tuesday March 22. Provided by the Sea Point Rotaiy Club's safe water project and Aqua4Life, this Community LifeStraw unit will provide the pupils of Berg River Primary School with safe drinking water for up to seven years. The Community LifeStraw is a high-volume, point-of-use community water purifier with built-in safe storage. The unit provides microbiologically safe drinking water for schools, health facilities, workplaces and community settings. According to Dr Tony Davidson of Sea Point Rotary, the children of Berg River Primary often suffered from illnesses associated with unsafe drinking water before the installation of the LifeStraw. "The high incidence of absenteeism as a result of these illnesses was one of the main reasons that Berg River Primary was selected as a recipient of the Community LifeStraw. When we first heard of how unsafe drinking water was affecting the education of these children, it was clear just how much good this installation would do," said Dr Davidson. A second LifeStraw was also installed at a nearby local community of 450 people, who have also been without safe drinking water. To date, the Sea Point Rotary Club's Safe Water project has provided safe drinking water to more than six communities in the Cape Winelands area. In addition to Rotarians donating to Rotary's Safe Water Project, everyday South Africans from across the country have also contributed towards these communities by purchasing Relate brace-lets. These funds are also used in funding of entrepreneurial projects associated with the LifeStraw units. Relate Bracelets produces handmade beaded bracelets in support of more than 70 causes, one of which is Rotary's Safe Water Project. Proceeds from the sale of each bracelet support not only the relevant causes, but also the seniors in impoverished communities who supplement their pensions by threading the beads. Many of these senior citizens care for their grandchildren and others orphaned by HIV/Aids. Relate's younger staff members, who close and pack the bracelets, also benefit with training in their chosen fields to further their careers beyond Relate. The bracelets are recognisable by their signature "R" bead, and the buying of just one bracelet, at R39, is equivalent to purchasing 2 000 litres of clean and safe water. Additionally, Relate Bracelets has donated funds to more than 70 causes to date. Neil Robinson, chief executive officer of the organisation, asks: "What if every employed South African bought just one bracelet each year? "That would mean more than quarter of a billion rand would go towards these causes annually, with this easy to-to-do, small spend impacting on our country in a big way. "It could result in a big dent in our country's problems," he said.

This article was first published in the Atlantic Sun on 24 March 2016.