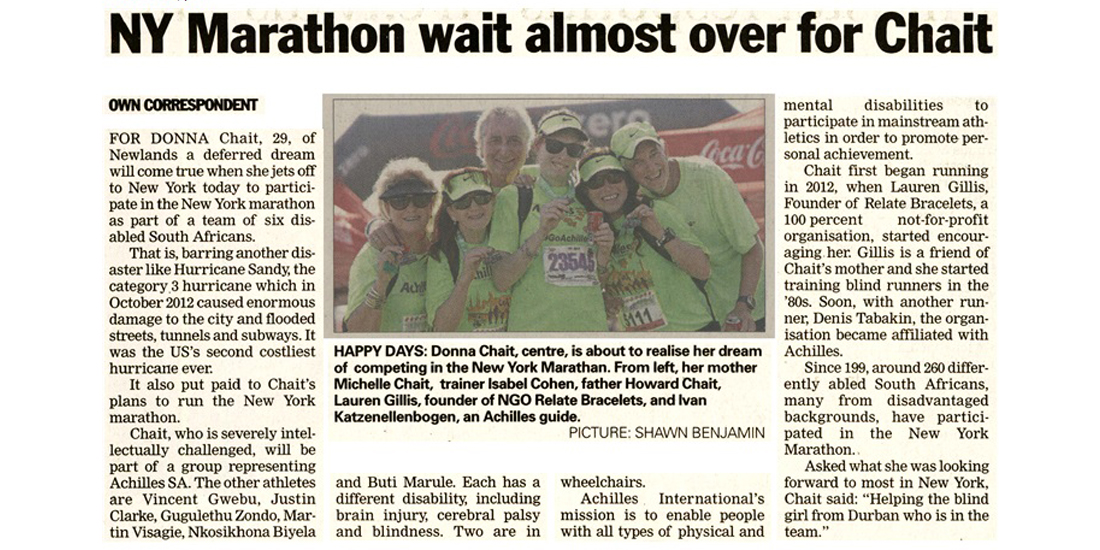 For Donna Chait, 29, of Newlands a deferred dream will come true when she jets off to New York today to participate in the New York marathon as part of a team of six disabled South Africans. That is, barring another disaster like Hurricane Sandy, the category, 3 hurricane which in October 2012 caused enormous damage to the city and flooded streets, tunnels and subways. It was the US's second costliest hurricane ever.

It also put paid to Chait's plans to run the New York marathon.

Chait, who is severely intellectually challenged, will be part of a group representing Achilles SA. The other athletes are Vincent Gwebu, Justin Clarke, Gugulethu Zondo, Martin Visagie, Nkosikhona Biyela and Buti Marule. Each has a different disability, including brain injury, cerebral palsy and blindness. Two are in wheelchairs.

Achilles International's mission is to enable people with all types of physical and mental disabilities to participate in mainstream athletics in order to promote personal achievement.

Chait first began running in 2012, when Lauren Gillis, Founder of Relate Bracelets, a 100 percent not-for-profit organisation, started encouraging.her. Gillis is a friend of Chait's mother and she started training blind runners in the '80s. Soon, with another runner, Denis Tabakin, the organisation became affiliated with Achilles.

Since 199, around 260 differently abled South Africans, many from disadvantaged backgrounds, have participated in the New York Marathon.

Asked what she was looking forward to most in New York, Chait said: "Helping the blind girl from Durban who is in the team."

This article was first published in the Sunday Weekend Argus on the 26 October 2016, to see the pdf version click here.