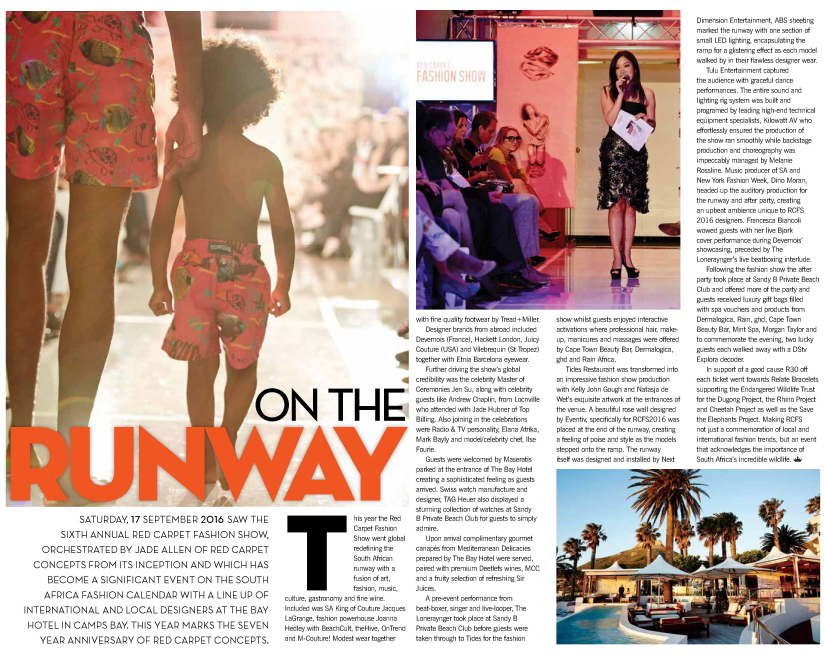 SATURDAY, 17 SEPTEMBER 2016 SAW THE SIXTH ANNUAL RED CARPET FASHION SHOW, ORCHESTRATED BY JADE ALLEN OF RED CARPET CONCEPTS FROM ITS INCEPTION AND WHICH HAS BECOME A SIGNIFICANT EVENT ON THE SOUTH AFRICA FASHION CALENDAR WITH A LINE UP OF INTERNATIONAL AND LOCAL DESIGNERS AT THE BAY HOTEL IN CAMPS BAY. THIS YEAR MARKS THE SEVEN YEAR ANNIVERSARY OF RED CARPET CONCEPTS.

This year the Red Carpet Fashion Show went global redefining the South African runway with a fusion of art, fashion, music, culture, gastronomy and fine wine. Included was SA King of Couture Jacques LaGrange, fashion powerhouse Joanna Hedley with Beach Cult, the Hive, On Trend and M Couture! Modest wear together with fine quality footwear by Tread+Miller. Designer brands from abroad included Devernois (France), Hackett London, Juicy Couture (USA) and Vilebrequin (St Tropez) together with Etnia Barcelona eyewear. Further driving the show's global credibility was the celebrity Master of Ceremonies Jen Su, along with celebrity guests like Andrew Chaplin, from Locnville who attended with Jade Hubner of Top Billing. Also joining in the celebrations were Radio & TV personality, Elana Afrika, Mark Bayly and model/celebrity chef, Ilse Fourie. Guests were welcomed by Maseratis parked at the entrance of The Bay Hotel creating a sophisticated feeling as guests arrived. Swiss watch manufacture and designer, TAG Heuer also displayed a stunning collection of watches at Sandy B Private Beach Club for guests to simply admire. Upon arrival.complimentary gourmet canapes from Mediterranean Delicacies prepared by The Bay Hotel were served, paired with premium Deetlefs wines, MCC and a fruity selection of refreshing Sir Juices. A pre-event performance from beatboxer, singer and livelooper, The Loneraynger took place at Sandy B Private Beach Club before guests were taken through to Tides for the fashion show whilst guests enjoyed interactive activations where professional hair, makeup, manicures and massages were offered by Cape Town Beauty Bar, Dermalogica, ghd and Rain Africa. Tides Restaurant was transformed into an impressive fashion show production with Kelly John Gough and Natasja de Wet's exquisite artwork at the entrances of the venue. A beautiful rose wall designed by Eventiv, specifically for RCF52016 was placed at the end of the runway, creating a feeling of poise and style as the models stepped onto the ramp. The runway itself was designed and installed by Next Dimension Entertainment, ABS sheeting marked the runway with one section of small LED lighting, encapsulating the ramp for a glistering effect as each model walked by in their flawless designer wear. Tulu Entertainment captured the audience with graceful dance performances. The entire sound and lighting rig system was built and programed by leading high-end technical equipment specialists, Kilowatt AV who effortlessly ensured the production of the show ran smoothly while backstage production and choreography was impeccably managed by Melanie Rossline. Music producer of SA and New York Fashion Week, Dino Moran, headed up the auditory production for the runway and after party, creating an upbeat ambience unique to RCFS 2016 designers. Francesca Biancoli wowed guests with her live Bjork cover performance during Devernois' showcasing, preceded by The Loneraynger's live beatboxing interlude. Following the fashion show the after party took place at Sandy B Private Beach Club and offered more of the party and guests received luxury gift bags filled with spa vouchers and products from Dermalogica, Rain, ghd, Cape Town Beauty Bar, Mint Spa, Morgan Taylor and to commemorate the evening, two lucky guests each walked away with a DStv Explora decoder. In support of a good cause R30 off each ticket went towards Relate Bracelets supporting the Endangered Wildlife Trust for the Dugong Project, the Rhino Project and Cheetah Project as well as the Save the Elephants Project. Making RCFS not just a commemoration of local and international fashion trends, but an event that acknowledges the importance of South Africa's incredible wildlife.

This article was first published on 01 October 2016 by Prestige Magazine.