The United Nations recently launched Free & Equal – the first United Nations campaign promoting the equal rights of lesbian, gay, bisexual and transgender (LGBT) people and intersex persons. The campaign aims to raise awareness of human rights abuses targeting LGBT people, and to ask people to take a stand for human rights for all people, regardless of sexual orientation and gender identity. 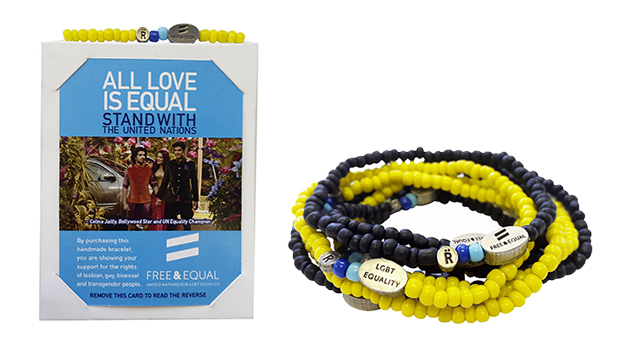 In partnership with the United Nations, Relate has created a Free & Equal campaign bracelet to raise awareness and support for the cause of LGBT equality.

Proceeds from the sale of this bracelet will be donated to Triangle Project, a human rights non-profit organisation advocating for the rights and well-being of the LGBT community and a society free of discrimination and violence.

In addition to the strong support of the United Nations’ Secretary-General Ban Ki-moon and the United Nations’ High Commissioner for Human Rights Navi Pillay, the Free & Equal campaign is promoted by a number of international celebrities who have pledged to help disseminate campaign messages through social and traditional media in their roles as Equality Champions.