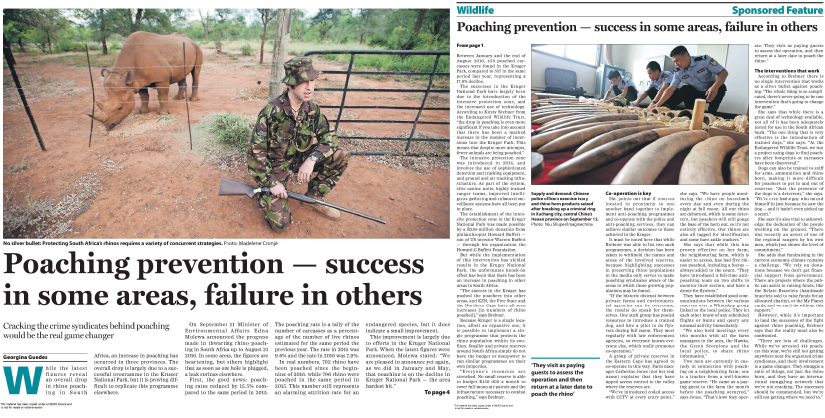 While the latest figures reveal an overall drop in rhino poaching in South Africa, an increase in poaching has occurred in three provinces. The overall drop is largely due to a successful programme in the Kruger National Park, but it is proving difficult to replicate this programme elsewhere.

On September 11 Minister of Environmental Affairs Edna Molewa announced the progress made in thwarting rhino poaching in South Africa up to August 31 2016. In some areas, the figures are heartening, but others highlight that as soon as one hole is plugged, a leak springs elsewhere.

This number still represents an alarming attrition rate for an endangered species, but it does indicate a small improvement. This improvement is largely due to efforts in the Kruger National Park.

When the latest figures were announced, Molewa stated: "We are pleased to announce yet again, as we did in January and May, that poaching is on the decline in Kruger National Park — the area hardest hit." No silver bullet: Protecting South Africa's rhinos requires a variety of concurrent strategies. Photo: Madelene Cronje

Poaching prevention — success in some areas, failure in others

She points out that if reserves located in proximity to one another band together to implement antipoaching programmes and cooperate with the police and antipoaching services, they can achieve similar outcomes to those achieved in the Kruger. It must be noted here that while Brebner was able to list two such programmes, a decision has been taken to withhold the names and areas of the involved reserves, because highlighting successes in preserving rhino populations in the media only serves to make poaching syndicates aware of the areas in which those growing populations may be found.

"If the historic distrust between private farms and environmental agencies can be overcome, the results do speak for themselves. One such group has pooled resources to introduce a trained dog, and hire a pilot to do flyovers during full moon. They meet regularly with law enforcement agencies, so everyone knows everyone else, which really promotes cooperation."

A group of private reserves in the Eastern Cape has agreed to cooperate in this way. Farm manager Catherine Jones (not her real name) explains that they have upped access control to the valley where the reserves are.

"We've introduced coded access with CCTV at every entry point," she says.

"We have people monitoring the rhino on horseback every day and even during the night at full moon. All our rhino are dehorned, which is some deterrent, but poachers will still gouge the base of the horn out, so it's not entirely effective. Our rhinos are also all tagged for identification and some have ankle trackers."

She says that while this has proven effective on her farm, the neighbouring farm, which is easier to access, has had five rhinos poached, including a foetus — always added to the count.

"They have introduced a fulltime antipoaching team on two shifts to monitor their section, and have a drone for flyovers."

They have established good communications between the various reserves over a WhatsApp group linked to the local police. They let each other know of any scheduled flights or hunts and query any unusual activity immediately.

"We also hold meetings every two months with all the farm managers in the area, the Hawks, the Green Scorpions and the local police, to share rhino information."

Two men are currently in custody in connection with poaching on a neighbouring farm; one is a tracker from a well-known game reserve.

"He came as a paying guest to the farm the month before the poaching occurred," says Jones.

"That's how they operate. They visit as paying guests to assess the operation, and then return at a later date to poach the rhino."

Between January and the end of August 2016, 458 poached carcasses were found in the Kruger Park, compared to 557 in the same period last year, representing a 17.8% decline.

The successes in the Kruger National Park have largely been due to the introduction of the intensive protection zone, and the increased use of technology.

According to Kirsty Brebner from the Endangered Wildlife Trust, "the drop in poaching is even more significant if you take into account that there has been a marked increase in the number of incursions into the Kruger Park. This means that despite more attempts, fewer animals are being poached."

The intensive protection zone was introduced in 2014, and involves the use of sophisticated detection and tracking equipment, and ground and air tracking infrastructure. As part of the system, elite canine units, highly trained ranger teams, improved intelligence gathering and enhanced surveillance systems have all been put in place.

The establishment of the intensive protection zone in the Kruger National Park was made possible by a R255 million donation from philanthropist Howard Buffett — son of US investor Warren Buffett — through his organisation the Howard G Buffett Foundation. But while the implementation of this intervention has yielded results in the Kruger National Park, the unfortunate knock-on effect has been that there has been an increase in poaching in other areas in South Africa.

"The success in the Kruger has pushed the poachers into other areas, and KZN, the Free State and the Northern Cape have all seen increases [in numbers of rhino poached]," says Brebner.

Because Kruger is a single location, albeit an expansive one, it is possible to implement a single programme that protects the rhino population within its confines. Smaller and private reserves around South Africa simply do not have the budget or manpower to run similar programmes on their own properties.

"The whole thing is so complicated, there's never going to be one intervention that's going to change the game."

She says that while there is a great deal of technology available, not all of it has been adequately tested for use in the South African bush.

"The one thing that is very effective is the introduction of trained dogs," she says.

"At the Endangered Wildlife Trust, we run a project using dogs to find poachers after footprints or carcasses have been discovered."

Dogs can also be trained to sniff for arms, ammunition and rhino horn, making it more difficult for poachers to get in and out of reserves.

"Just the presence of the dogs is a deterrent," she says. "We've even had a guy who turned himself in just because he saw the dog — and it hadn't even picked up a scent."

She says it's also vital to acknowledge the dedication of the people working on the ground. "There was recently an arrest of one of the regional rangers by his own men, which just shows the level of.commitment."

She adds that fundraising in the current economic climate remains a challenge.

"We rely on donations because we don't get financial support from government. There are projects where the public can assist in raising funds, like the Relate Bracelets (handmade bracelets sold to raise funds for an allocated charity), or the My Planet cards, and we can't do without this support."

However, while it's important to laud the successes of the fight against rhino poaching, Brebner says that the reality must also be confronted.

"There are lots of challenges. While we've arrested 414 poachers this year, we're still not getting anywhere near the organised crime syndicates, and their involvement is a game changer. They smuggle a suite of things, not just the rhino horn, and they have an international smuggling network that we're not cracking. The successes should be commended, but we're still not getting where we need to."