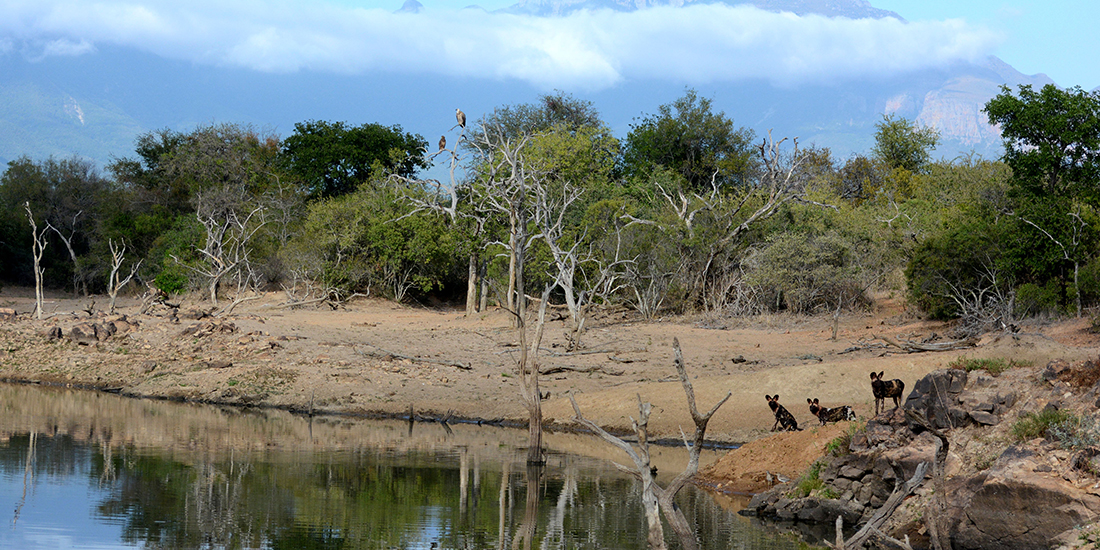 After another constructive meeting with SANParks and the State Vet services a project proposal will be submitted to continue monitoring of Wild Dogs within Kruger National Park, This will be to assist with the implementation of a disease screening and vaccination campaign. This is following concerns around potential spread of rabies, canine distemper and TB after individuals in the Manyaleti pack tested positive for TB and Distemper in 2015 and the demise of the entire Guernsey pack to rabies. The central area will be the key focus initially and the Orpen and Manyeleti packs are still fitted with GPS tracking collars that will assist locating the packs during the denning season to take samples, test for the relevant diseases and investigate the potentially to vaccinate as many individuals as possible. This will complement the project we are hoping to launch along the western boundary to vaccinate Wild Dogs in the adjacent private nature reserves using an oral vaccine SAG-2.

An adult Dog which unfortunately has not been identified was killed in a snare North West of Phalaborwa on Letaba Ranch, a provincial nature reserve bordering Kruger National Park. The dog is most likely from the Phalaborwa pack that has been moving outside the western boundary of Kruger recently. Letaba Ranch has been identified as a high risk area for snares but efforts are in place to reduce snaring through active snare removal by honorary rangers.

It is encouraging to see a number pregnant Wild Dogs have been identified through tourist reports and sightings during April. Wild Dogs are seasonal breeders that settle down to den during the winter months (May-August). Locating Wild Dog dens will assist with locating individuals to dart and test as part of the disease screening and vaccination campaign.

Data analysis for the 6th Wild Dog Photographic census is almost complete. Winning entries have been identified and the results will be released with the final report towards the end of June. The tool has once again proved to be a successful method to survey both Cheetah and Wild Dog numbers in an area as vast as Greater Kruger National Park.

The Pack released onto Blue Canyon continues to do well coving the majority of the reserve now and hunting with great success. I have been fortunate to witness them hunting successfully on a few occasions, at this stage prey preference appears to be Bushbuck, Nyala and Kudu which does make sence given the fact that the dogs were relocated to Blue Canyon from KZN. It is safe to say the pack has settled into their new home. As suspected  after observing the pack mating, the collared alpha female “Celukwazi” is pregnant and is likely to give birth to the pups towards the end of May or in the first few weeks in June. Interestingly the status of the Alpha male is not clearly defined at this stage. The collared male “Aladdin” appears to have fallen down in the pecking order as both “Reef” and “Qunu” have been observed mating with the alpha female. During April Aladdin and Qunu dispersed leaving the pack for a few days, at one stage they were 17km from the rest of the pack. To my surprise while following up on the collared female and the rest of the pack I found Aladdin and Qunu had reunited with the pack overnight.

The Pack has however split again towards the end of April with Aladdin, Langa and Ntokozo now dispersing from the pack. Aladdin has since been observed mating with the adult female Ntokozo so we may very well have two sets of pups born on Blue Canyon. This is normal for a newly bonded pack and it is also not unheard of for two females to fall pregnant in the same pack. The three dogs that’s have split from the main pack are often in close proximity and the dynamics will be interesting to observe once the alpha female has settled down to den.

As part of The Carnivore Conservation Programs new strategy, a project will be launched to address the effects of snaring on carnivores across South Africa. The initial phase of the project is to quantify the extent of snaring in key areas through coordinated research. This entails recording all information of snared animals into a central database to map high priority areas where snares are a threat to carnivores in particular. Information will also be gathered on snare removal initiatives from various reserves, organisations and individuals within each key area.

Rabies and other Carnivore diseases

Given the outbreak of rabies that eventually led to the demise of the Guernsey pack in Hoedspruit towards the end of 2015, the Carnivore conservation programme in collaboration with Activating Africa will be launching a Rabies vaccination campaign in communities and private reserves along the  western boundary of Kruger National Park and areas surrounding Hoedspruit. The Project is still in the planning phase and raising funds. The aim is to collaborate with the State veterinary department to increase the reach of existing rabies vaccination campaigns on domestic dogs in communities as well as investigating the potential to vaccinate as many carnivores as possible using an oral vaccine.

Support the EWT Wild Dog Project and buy a stack of bracelets.