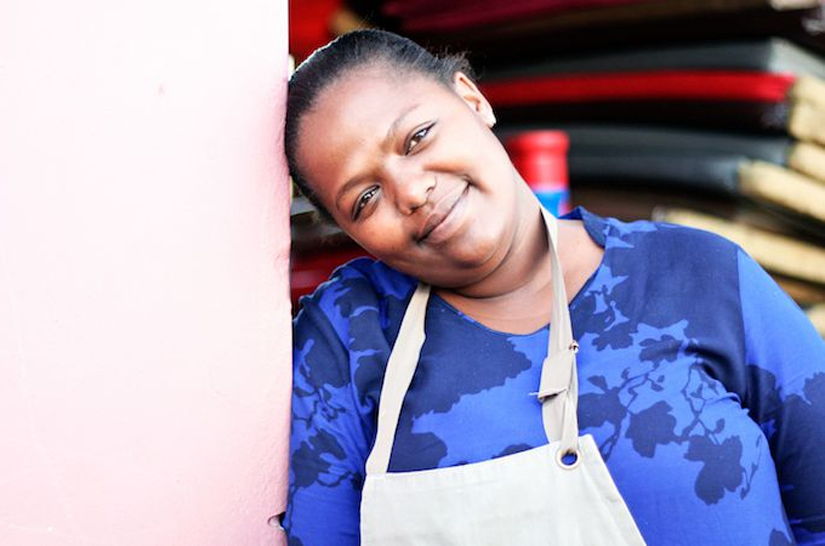 Sitting in her small and colourful office decorated with drawings by 55 children who attend her pre-school, Educare, 29-year-old Ayanda Mpokela of Khayelitsha Cape Town, shares how a need to help her mother set her on a different career path to what she had initially planned

Mpokela never thought that she’d be running her own business, employing eight women and providing a key service to her community.

She’d initially planned a career in healthcare and had trained to become a Nursing Assistant, she says.

“Educare wasn’t actually started by me. My mother, who is disabled and can’t read or write, got tired of trying to find work here and there as a cleaner. While [she was] at home, a lady from across the street asked her to look after her child during the day while she was at work. That [child] was Educare’s first pupil. Through word of mouth, more and more children came to my mother and that’s how Educare was born.”

In 2009, at her mother’s request, Mpokela left healthcare to become Educare’s new principal. Initially, she was not thrilled about the idea.

“I don’t want to say I liked it at first. But I did it for my mom because whatever I have today is because of her,” says Mpokela who now loves her role at Educare and has plans to expand the centre.
“My neighbour is willing to move for us to expand into her house, but the problem is the finances, ” she says.

Mpokela explains her challenge in trying to raise money, saying: “We don’t ask for much from the parents, because the money they pay us comes from grants. And most of the children that are here have teenage mothers who are left with their grandmothers.”

Describing the journey of running a business, Mpokela explains that she received a lot of help from a local programme for women who run pre-schools. The programme is run by NGO Ikamva Labantu.

“Through this programme, we learnt management skills like how to develop your staff or resolve conflict. For instance, if a person has a problem, maybe it’s a personal problem, which you would then see [manifest] in how they’re not performing well.”

According to Ikamva Labantu Director Ananda Nel, the NGO, also based in Khayelitsha, runs an Early Childhood Development (ECD) programme aimed at upskilling and assisting township principals like Mpokela.

“The township principals in our ECD forum require assistance with the task of getting their pre-schools registered in order to qualify for government grants. By collaborating with the provincial Department of Social Development, we have found a creative way of addressing the problems that unregistered pre-schools face. We provide pre-school principals with administrative assistance and on-site guidance to meet the criteria for registration,” Nel says.

“Most ECD practitioners in townships have very limited formal training in ECD, if any at all. Therefore we also provide practical training programmes for practitioners on how to engage with children and their parents in order to create a solid foundation for future learning.”

Nel says Lauren Gillis is another woman who is an integral part of this story. Gillis is founder of 100% not-for-profit Relate Bracelets, which makes handmade beaded bracelets in support of more than 80 causes, one of which is Ikamva Labantu. Relate recently launched a Women’s Empowerment Bracelet product available at Poetry Stores nationwide and on Relate’s website.

“The initial idea I had in mind 12 years ago was to create a vehicle through which to help build women’s self-esteem and confidence,” Gillis says.

To date, Relate, has raised more than R33 million for its beneficiary causes in health, education, conservation, social upliftment, children, and empowerment. The platform has raised close to R1 million for the programmes Ikamva Labantu runs and the two entities have a symbiotic relationship as Ikamva Labantu’s local township senior clubs provide the majority of Relate’s workforce.  The gogos who thread the beads for Relate bracelets use this extra income to help supplement their pensions.

This article was first published on 18 August 2016 by Destiny Connect.