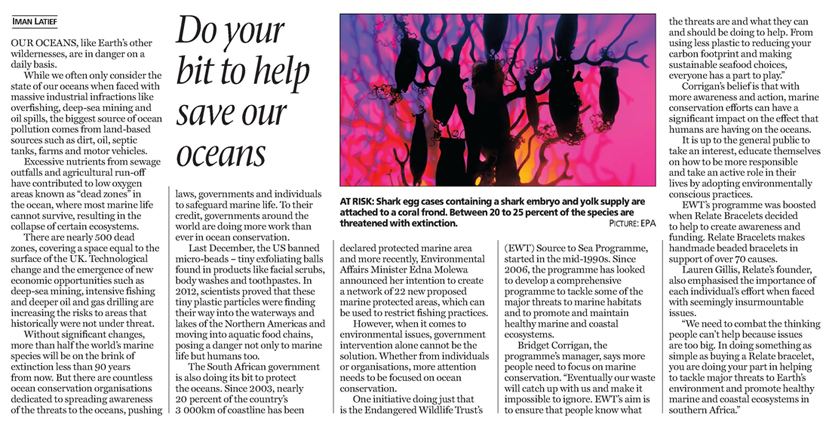 OUR OCEANS, like Earth's other wildernesses, are in danger on a daily basis. While we often only consider the state of our oceans when faced with massive industrial infractions like overfishing, deep-sea mining and oil spills, the biggest source of ocean pollution comes from land-based sources such as dirt, oil, septic tanks, farms and motor vehicles. Excessive nutrients from sewage outfalls and agricultural run-off have contributed to low oxygen areas known as "dead zones" in the ocean, where most marine life cannot survive, resulting in the collapse of certain ecosystems.

There are nearly 500 dead zones, covering a space equal to the surface of the UK. Technological change and the emergence of new economic opportunities such as deep-sea mining, intensive fishing and deeper oil and gas drilling are increasing the risks to areas that historically were not under threat. Without significant changes, more than half the world's marine species will be on the brink of extinction less than 90 years from now.

But there are countless ocean conservation organisations dedicated to spreading awareness of the threats to the oceans, pushing laws, governments and individuals to safeguard marine life.

To their credit, governments around the world are doing more work than ever in ocean conservation. Last December, the US banned micro-beads - tiny exfoliating balls found in products like facial scrubs, body washes and toothpastes. In 2012, scientists proved that these tiny plastic particles were finding their way into the waterways and lakes of the Northern Americas and moving into aquatic food chains, posing a danger not only to marine life but humans too. The South African government is also doing its bit to protect the oceans.

Since 2003, nearly 20 percent of the country's 3 000km of coastline has been declared protected marine area and more recently, Environmental Affairs Minister Edna Molewa announced her intention to create a network of 22 new proposed marine protected areas, which can be used to restrict fishing practices. However, when it comes to environmental issues, government intervention alone cannot be the solution. Whether from individuals or organisations, more attention needs to be focused on ocean conservation.

One initiative doing just that is the Endangered Wildlife Trust's (EWT) Source to Sea Programme, started in the mid-1990s. Since 2006, the programme has looked to develop a comprehensive programme to tackle some of the major threats to marine habitats and to promote and maintain healthy marine and coastal ecosystems. Bridget Corrigan, the programme's manager, says more people need to focus on marine conservation.

"Eventually our waste will catch up with us and make it impossible to ignore. EWT's aim is to ensure that people know what the threats are and what they can and should be doing to help. From using less plastic to reducing your carbon footprint and making sustainable seafood choices, everyone has a part to play."

Corrigan's belief is that with more awareness and action, marine conservation efforts can have a significant impact on the effect that humans are having on the oceans. It is up to the general public to take an interest, educate themselves on how to be more responsible and take an active role in their lives by adopting environmentally conscious practices. EWT's programme was boosted when Relate Bracelets decided to help to create awareness and funding.

"We need to combat the thinking people can't help because issues are too big. In doing something as simple as buying a Relate bracelet, you are doing your part in helping to tackle major threats to Earth's environment and promote healthy marine and coastal ecosystems in southern Africa."

This article was first publsihed by African Independent on 10 June 2016.