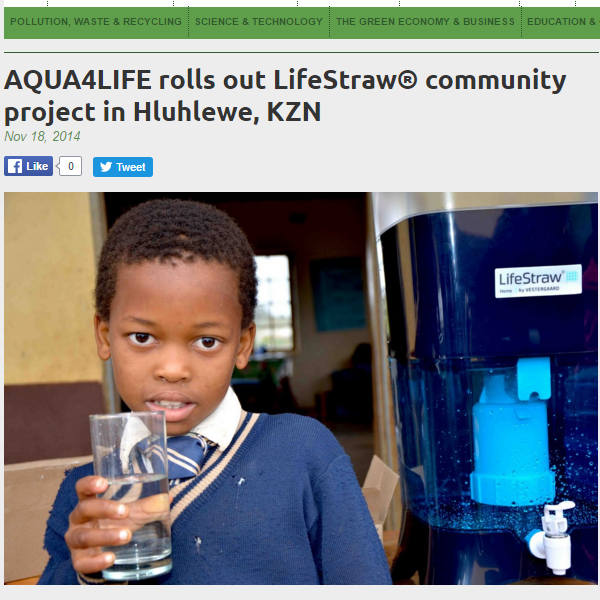 “With LifeStraw® my company is dedicated to improving the health of disadvantaged communities by providing safe drinking water to the places that need it the most. Through strategic partnerships with organizations like Rotary, other NGO’s, corporate companies with CSI Commitments and the support of government, we hope to distribute more LifeStraw® filters to needy communities” says Aqua4Life Managing Director, Nico Germishuizen.

Germishuizen adds that this project would not have been possible without the funds raised through the sale of Relate bracelets by the Rotary Club of Sea Point’s Water Project.

Like many communities in South Africa, Hluhluwe faces the dual challenge of local service delivery and a high HIV/ Aids rate. According to Daniel Tharratt, Protea Hluhluwe General Manager, the water supply in the area is not only limited, but the quality of the water cannot be guaranteed.

“We have very limited purifying resources here. Except in hubs, the water reticulation and piping is limited. So the rural communities are dependent on water from one reservoir that supplies the whole area. The water is transported using trucks and when it is moved in containers that is where the breakdown comes in. So while it might have been clean to start with, it can get polluted when it is moved,” says Tharratt.

As well as relying on the limited water systems, communities in Hluhluwe also collect rainwater in big plastic “Jojo” tanks. This water, used for drinking, washing and cooking, also faces a high risk of being contaminated by bacteria and algae.

These tanks can clearly be seen at all the schools where the LifeStraw® water filters are being rolled out. The first school to receive a community filter is Makhasa Technical School, which is attended by 1000 pupils. Following the unveiling of the filter and a brief demonstration on how it works, the Mayor invites the principal and her pupils to taste the clean water. Their smiles of appreciation are evidence enough that the water not only looks cleaner, but also tastes better.

“We did not know about these filters until now. I hope they will keep the children at our schools healthy so that they can perform well in class.” says Mayor Gumede.

Access to clean water reduces school absenteeism because it prevents learners from getting waterborne diseases. In turn this improves their nutrition levels, as vital nutrients are not lost through diarrhea and increases children’s productivity and performance by keeping them hydrated.

After delivering and setting up the LifeStraw® units at Hluhluwe’s local Mduku clinic, the sisters and nurses in the choir sang a beautiful song of appreciation that they made up on the spot. Sister Precious Gumede commented that she was very grateful for the filter because she often had to send patients home with instructions to only take their medicine with water they had boiled, to ensure if was clean and safe.

“This [water filter] will really help us. Now we can administer the medication here at out clinic. We can also send them home with clean water in the bottles they gave us so out patients can take their pills at home” says Sister Gumede.

With the assistance of Protea Hotel, local government and local NGOs, the Aqua for life and Rotary team delivered the units to a number of primary schools in the area. Despite being the end of the school day, a number of cute, curious and wide-eyed Phumlani Primary School pupils left the playground to gather round and watch their teachers being shown how to operate and maintain their new LifeStraw® filter. Many of them were excited about the big blue water tank, even if they were too young to understand the benefits clean water would bring to their lives.

“A woman recently told of the futility she felt and still feels at the death of her daughter from brain cancer and trying to cope each day with others that she is trying to help… So when we look at the eyes of a child drinking that very first cup of healthy clean water, we then understand the enormity but attempts at saving lives isn’t all futile; we are driven to stop senseless death from a lack of basic right to clean water in communities… somehow one cup and one child at a time!” says Germishuizen.

According to a UNICEF and World Health Organization Joint Monitoring Programme for Water Supply and Sanitation, nearly one in five child deaths – about 1.5 million each year – is due to diarrhea.

In Kenya high-volume LifeStraw® Community water purifiers have already provided more than 23 million liters of safe water a year and now to over 125,000 school children in the country’s western province through the “FOLLOW THE LITRES” project. Hluhluwi is the first time that a rural community rollout of this nature of LifeStraw® units has occurred in South Africa.

LifeStraw® is being imported through Aqua4Life from Swiss-based company Verstergaard Frandsen. Upon purchase of any LifeStraw® product, Vestergaard guarantees that it provides clean water for a child in Africa for the period of one year through their humanitarian Social Responsibility program – FOLLOW THE LITRES.