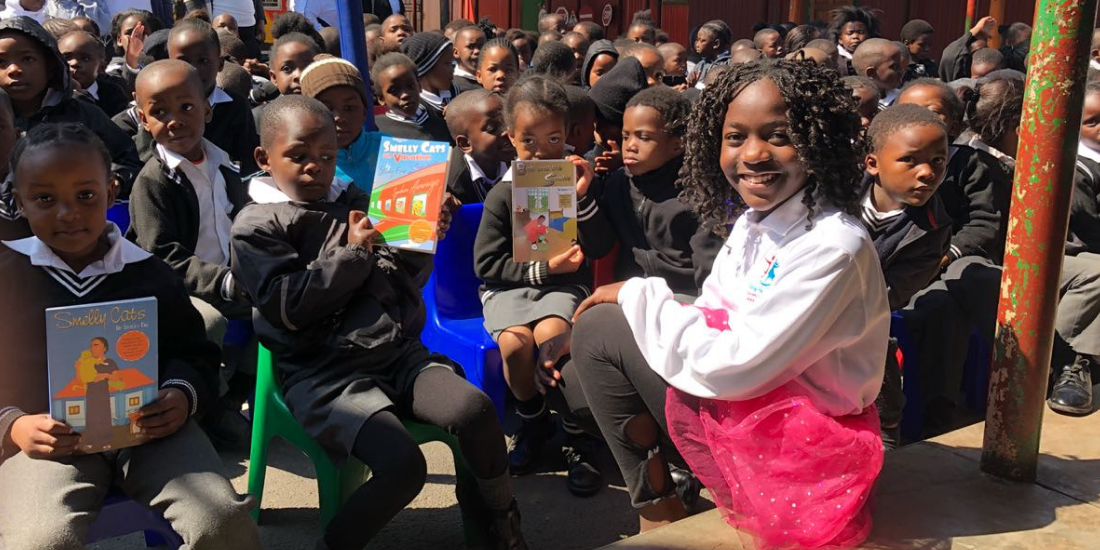 Teachers and children at the historic Crown Mines Primary School gathered at their local library on Monday for a special National Book Week reading with accomplished local author, Stacey Fru.

Fru’s success isn’t due only to having three of her books published by the age of eleven, but for being Africa’s youngest published author at age seven.

The young writer stood and spoke animatedly before a rapt, wide-eyed audience of foundation phase learners and teachers as she read from her first book, Smelly Cats.

It was a particularly special moment for the Crown Mines School community which received the library – housed in a shipping container – in February 2015 through the Mandela Library Project (MLP).

The Mandela Library Project (MLP) works with under-resourced schools to establish and maintain container libraries in order to boost literacy.

Robert Coutts, Mandela Education Project CEO (under which the library project falls) said it was an honour to join Stacey for the reading of her work at Crown Mines.

“Stacey is an example of the power of education and, specifically, literacy. To be able to understand and portray real-life struggles as she did with her Smelly Cats story at just seven years old shows how life-changing education, particularly at the foundation phase, is.

“It’s the truest example of Nelson Mandela’s famous quote that ‘education is the most powerful weapon which you can use to change the world’.”

The library project is the focus this year of one of the Relate Trust’s biggest single crowdfunding initiatives to date: the Mandela Centenary Bracelet campaign. Through individual and business partnerships, their vision is to fund new libraries and impact thousands of children across the nation.

The project has seen marked success with a recent report detailing how pupils significantly improved in their reading ability at schools where the library programme has been enacted.

Since 2011, the Mandela Library project has seen the delivery of more than 100 libraries. Each library typically services 1 000 children per year and remains active for at least 15 years. The libraries are managed on a daily basis by education and social justice NGO, SoulBuddyz.

The NGO’s Gauteng manager, Nelisiwe Hlope, said their work with children through the libraries has made a visible difference in the lives of hundreds of thousands of children.

“The libraries create a reading culture among the children even when they’re not busy with classwork. And this doesn’t just impact their language subjects, but we see that the more the children read, the better their overall academic performance,” said Hlope.

But it’s not just the school children for whom the library project makes a difference. The facilities are also open to the surrounding communities.

Stacey said she jumped at the opportunity to read to the children of Crown Mines as she wanted to help them see how powerful literacy can be.

“Reading and writing changed my life and I want to give every other child like me the opportunity to enjoy the wonders of books like I have. That’s why what the Mandela Library Project does is so important. One book can change a life.”

Speaking to the adults in the room, Stacey urged them to support the Mandela Centenary campaign: “With just one Mandela bracelet, you can help get books to children and you can change their lives. And the bracelets are really cool too!”

At the age of seven, she wrote her first book, Smelly Cats, without her parents’ knowledge. The book was approved by the Department of Basic Education as suitable for young learners from early childhood through to primary school level.

Now at eleven, Stacey has not only had two more books published, she’s also received numerous awards and started her own education-focused foundation.

Members of the public can support the Mandela Library Project and job creation by buying Mandela Centenary Relate bracelets from Woolworths stores, Pick n Pay online, Made In SA, Out of Africa, and The Tiger’s Eye stores. They can also visit Relate's online shop.

To find out more about the Mandela Library Project click here.

This article was first published by Bookslive.com on 04 September 2018.